‘What The **** Have I Just Hit?’: British Warship Tangles With Russian Sub In The Arctic

A close encounter between a Royal Navy warship and a Russian submarine culminated with the sub colliding with the ship’s towed sonar array.

The H.M.S. Northumberland was on routine patrol in the Arctic and stalking the Russian submarine with the aid of its sonar. Type 23 frigates like the Northumberland carry the Sonar 2087 system, which incorporates low-frequency transmitters and hydrophones, sensitive underwater microphones. Such arrays can be more than a kilometer long; their size allows them to pinpoint the exact range and distance of submarines. Type 2087 is said to be able to detect subs before they can get close enough to attack.

The incident occurred when a British television crew was on board filming a documentary series Warship: Life at Sea. During the incident, which occurred in late 2020, the submarine’s periscope was spotted on the surface by the Northumberland’s Merlin helicopter. The submarine, a nuclear-powered hunter-killer type, then dived.

During the encounter Commander Thom Hobbs, Northumberland’s captain, comments that: “We are very close to the submarine. If they were on the surface, we would definitely see faces.”

Shortly afterwards the submarine collides with the sonar array and a crewman can be heard saying, “What the hell was that?” Another asks, “What the **** have I just hit?”

H.M.S. Northumberland was forced to cut its mission short and return to Scotland for repairs to the damaged sonar. It is not known whether the Russian sub sustained any damage, but Russian submarines carry an array of sensitive instrumentson their tower which may have suffered.

Because they cannot be seen, there is always a collision danger with submarines, especially during sub-on-sub encounters. During the Cold War, when U.S. and allied subs frequently shadowed Soviet ballistic missile submarines, the Russians would sometimes execute a maneuver known as a ‘Crazy Ivan,’ a sudden U-turn to shake off anyone following in their blind spot. This could result in collisions, such as the occasion a Russian sub ran into the U.S.S. Tautog in 1970 while doing a Crazy Ivan.

The latest collision was unlikely to have been deliberate or reckless. In this case, it was only made public because of the presence of the film crew. There may be many more cat-and-mouse encounters between NATO warships and Russian submarines which do not come to the attention of the media.

“This is unremarkable,” HI Sutton, a submarine expert who runs the Covert Shores site, told me. “Except for novelty for the general public.”

When the U.S. nuclear submarine U.S.S. Connecticut recently returned with damagefrom an underwater collision in South China Sea, the official story was that it had struck an underwater mountain or seamount. Two senior offers were firedas a result.

In the past, many have cast doubt on whether Russia’s submarine force is battle-readydue to a large proportion of boats from the 80’s and 90’s being in doubtful condition, and whether the once-mighty fleet had fallen into disrepair. Recent investments may have changed that and produced a force to be reckoned with again, a view that Sutton believes is supported by this latest encounter. 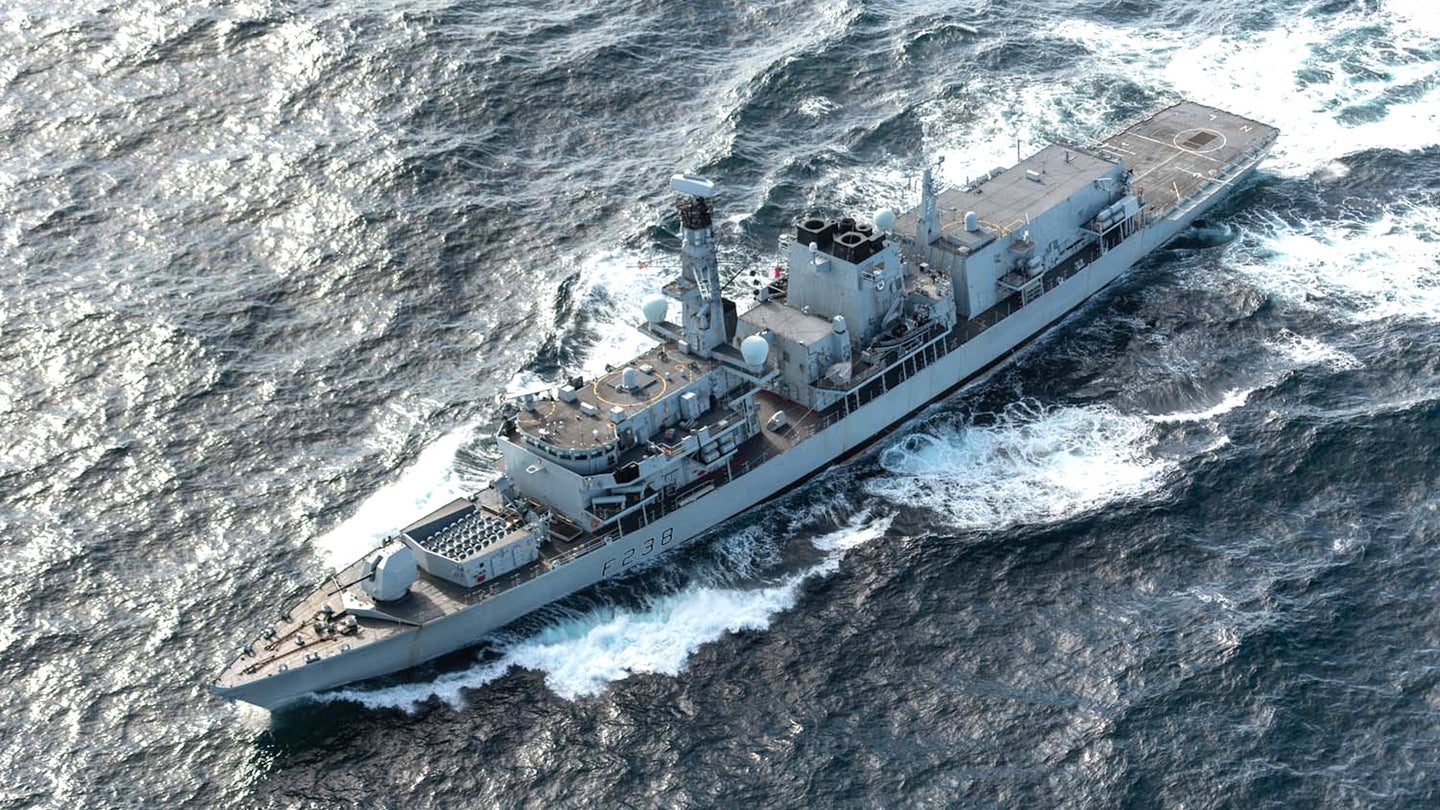 The U.K. Ministry of Defense has confirmed that a towed sonar array trailing behind the Royal Navy’s Type 23 frigate HMS Northumberland collided with a Russian Navy submarine in the North Atlantic Ocean two years ago. Both vessels were reportedly damaged in the incident, which appears to be the first of its kind, at least that we know about, since the end of the Cold War.

The 2020 collision was first revealed in a recent episode of the television show Warship: Life At Sea, which is now in its third season on Channel 5 in the United Kingdom. The show, in general, offers a rare behind-the-scenes look at the day-to-day operations of an actual Royal Navy warship.

The show is not readily available to viewers outside of the United Kingdom, but the second episode is said to include a segment where 5,400-ton-displacement Northumberland is described by British media outlets as a ‘playing cat-and-mouse game’ with an unspecified Russian submarine.

“Television footage captures the moment crew onboard HMS Northumberlandsound the alarm, shouting ‘what the hell was that,’ ‘shit,’ ‘what the f*** have I just hit’ as the boat crashes into its towed array sonar,” according to a report from The Times newspaper in the United Kingdom.

“It is believed to be the first time such an incident has been documented and made public,” that same story adds. This would appear, however, to only refer to incidents since the collapse of the Soviet Union. British and Soviet naval vessels, including submarines, are known to have hit each other during the Cold War.

“In late 2020 a Russian submarine being tracked by HMS Northumberlandcame into contact with her towed array sonar,” the U.K. Ministry of Defense said in a statement given to multiple outlets. “The Royal Navy regularly tracks foreign ships and submarines in order to ensure the defense of the United Kingdom.”

Northumberland is one of a number of Type 23 frigates that were retrofitted some years ago with the improved Type 2087 towed sonar array, which is a Low Frequency Active (LFAS) type, but that can be operated in active and passive modes. You can read more about how modern warships use towed and other types of sonar arrays to hunt for enemy submarines here.

The exact circumstances of this incident are unknown. However, collisions involving submarines, even modern types with advanced sonars and other sensors, are hardly underhead of and can occur for a variety of reasons.

An official Royal Navy press release regarding the frigate’s activities between September and December of 2020, at which time it was part of HMS Queen Elizabeth‘s carrier strike group, also known as Carrier Strike Group 21, makes no mention of the collision, nor the need to fix any damage. It does say the ship “stopped in Dundee, Lerwick and Faslane during her latest missions.” All of these locations are in Scotland.

At the time of writing, there does not appear to be any official statement from the Russian government regarding this incident.

It seems very plausible that the Russian submarine in question was shadowing CSG21 and Queen Elizabeth, which is the Royal Navy’s current flagship. The first episode of season three of Warship: Life At Sea, which can be found online, as seen below, also involves a segment where Northumberland positions itself between a Russian intelligence-gathering ship and the carrier.

The disclosure of this incident follows years of U.K. military officials, as well as their counterparts in the United States, sounding the alarm about significant increases in Russian submarine activity in the North Atlantic. In recent years, the Russian Navy has fielded a number of new, more modern, and quieter submarines that are much harder to spot and track.

Commander Thom Hobbs, Northumberland‘s commander officer, can be heard echoing similar sentiments in the first episode of season three of Warship: Life At Sea as he tells his crew that they’ve been ordered to intercept a group of Russian surface vessels that appear to be heading toward CSG21. “The Russians who are deploying against us are as good as or better than us,” he says.

The disclosure of this collision last year certainly underscores how real the tension, as well the potential danger, can be at the moment between British and Russian naval vessels operating in the region.